For every order, we donate 2% to Surfrider Foundation!
Account

Two months have passed since our team went on their very first Slate Surf trip.

We composed a team of various riders to join us on a journey of surfing in the little beach village of Vieux Boucau. Here’s a little recap.

On the 7th of August we took off with 2 vans packed with boards, wetsuits, and a lot of surfing hunger. Destination: Atlantic Ocean.
The weather report was promising with a good swell in forecast, so the excitement level was high.
Sunday upon arrival a first session was scheduled early in the morning. The early wake-up was worth it, the first turns were set.

The mark was set for the rest of the week, we couldn’t wait what the rest of the swell would bring us.
Our mission with the trip was not only to surf, but getting better was what we aimed for. To raise the bar for everyone we had the company of Pepijn.
The dutch champion joined our trip to sharpen the technique of the riders. Packed with some video equipment, he filmed the riders during the day and analysed their technique
with a feedback session after dinner and evening session to finish the day in style. In fact, he was not the only one with a camera there. We were accompanied by a film crew who were making a documentary, named “Big waves will rise you” starred by our rider Sam Carton. The movie will attend to the Ostend Film Festival.

Beside spending a lot of time in the water, as the conditions kept on moving in a positive way, we did a lot of side activities. The surf skates were one of the main tools to make progress in our surfing technique and movements. Skate trips to the local park and to the perfect asphalt lane, recommended by our Surfblend host Dries Venken, were regular affairs. To optimize the physical aspect of our riders we had some spikeball sessions completed with some additional running. The delicious food, including a pizza night, kept everything in a perfect balance.

We have made a lot of progression in different aspects but what is more important, we came back as a group of friends. We want to thank everyone who made this trip possible, especially our riders! Hats off to the crew who were always ready to solve a problem and for making it an unforgettable journey!

“A week before departure, the slate team received a message with the surf forecast for our trip. The trip couldn’t go wrong anymore and we hadn’t even left yet. After a long dry spell  on the French coast the waves suddenly arrived, the slate team was ready to face those waves. From day 1 the waves were present and the team hit the water. The slate team is very diverse which created interesting situations both in the water and on land. You have a sense of togetherness as you paddle side by side into the water with the team ready to take on waves that give you a huge rush of adrenaline. There is nothing better in the world than being able to share this feeling and experience it together. The whole team’s level has improved incredibly on this trip thanks to our surf coach Pepijn Tigges who did the video analysis with us from the beach. As a result, I personally learned a lot and this sport has only becoming more addicting. For this I would like to thank Slate surf very much for this opportunity and for getting Belgian wave surfers to a higher level. Beside the fact that we were there to improve our surfing skills, the team was on a holiday and loved to go bodyboarding in beach breaks for fun  and at night exploring downtown Vieux-Bouceau. But never too late because the waves do not wait for you. So after a long day all alarm clocks were set  to be the first in the line-up the next day. It was a week to remember and I feel strongly connected to the team even though we live all throughout Belgium the sea will always bring us back together.”
– Slate Surf rider Felix De Pauw 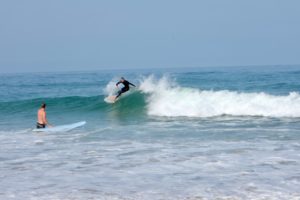 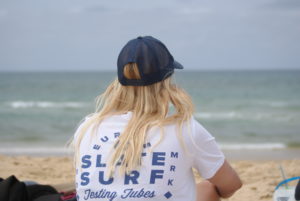